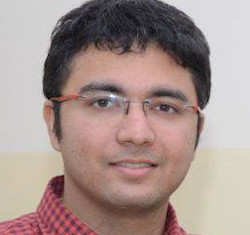 Sagar has an integrated Bachelor's degree in Computer Science and a Master’s in Physics from BITS Pilani, India. His master's thesis was in the area of Quantum Games. After graduating, he worked 2 years as a Software Engineer with projects including writing backend code for a vertical search engine(Stayzilla) and to perform query intent classification for chatbots using Convolutional Neural Networks(at Justdial).

His main research interest is in mathematical and quantum based modelling of systems in Information Retrieval, Artificial Intelligence, and Social Sciences. As an Early Stage researcher, his project is about dynamic modelling of user behaviour in Information Retrieval using Quantum logic. The mathematical framework of Quantum theory has been shown to successfully model and interpret irrational human behaviour. The fundamental similarity between microscopic particles and human decision making is that both are indeterministic and contextual. He aims to further investigate Quantum-like contextuality in decision making and apply it to User Modelling.  He is also interested in the philosophical aspects of Quantum Theory and using the Quantum framework in AI and Natural Language Understanding.